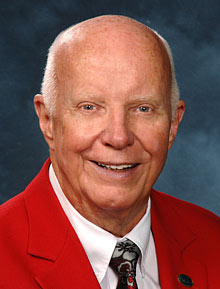 Sylvester retired from full-time teaching in June 2003 after 37 years of service to Florida's institutions. He remained with Seminole State until 2006 as an adjunct instructor.

In recognition of his teaching accomplishments, the College honored Sylvester with an "Excellence Award" during the 1998 National Institute for Staff and Organizational Development Conference in Austin, Texas.

Grateful for the opportunities he received at Seminole State, he established an Endowed Teaching Chair as a way of giving back.

"I love Seminole State College," Sylvester says. "It makes me very happy that l can provide a continuous gift to the College as an Endowed Teaching Chair and give an award to a fellow professor for excellent teaching."

Sylvester served as a member of the Foundation's Board of Directors for many years, beginning in 1998. He was the Faculty Senate Representative for five years, and became an Ex-Officio Member in 2010. During his years of membership he was also elected several times to serve as the Board’s Treasurer, continues to sit on the Board's Finance Committee and is a silver member of the Presidents' Club.

Sylvester began his other teaching career — in aviation training — many years ago as an FAA-certified flight and ground instructor. Over the years, he logged more than 4,000 hours helping pilots earn single- and multi-engine, glider, helicopter and instrument certification. Some of his former students continue to serve as airline transport pilots today.

Sylvester's two passions overlapped during his early years at Seminole State. While teaching at the College, he spent many weekends transporting aircraft to California for Piper Aircraft Company in Vero Beach.