What started in 1966 as a few portable classrooms huddled in a former citrus grove is now Seminole State College of Florida with six sites spanning Seminole County and enrollment near 30,000.

A Tradition of Excellence in Central Florida

From Orange Grove to Alma Mater

March 1966: A lot that once belonged to Chase Citrus Groves, near U.S. 17-92 and Interstate 4, was selected for the College's campus.

July 1968: The Florida Legislature removed junior colleges from the purview of county school boards and turned the colleges' advisory boards into district boards of trustees. 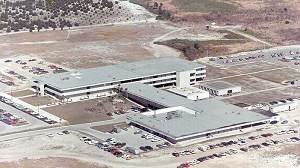 1994: The Lt. Jim Brantley Firing Range opened at Geneva. The Public Safety Training Center is located on 221 acres of land that the College leases from Seminole County.

2000: The College's Seminole Technology Business Incubation Center opened at the Port of Sanford.

October 2000: President George W. Bush, then the Republican nominee, gave a campaign speech at the Sanford/Lake Mary Campus. He was joined by Sen. John McCain and Gov. Jeb Bush.

2004: Thousands of students were relocated after Hurricane Frances caused severe damage to building B on the Sanford/Lake Mary Campus. Gov. Jeb Bush visited the campus to view the damage. The College was honored with the Bellwether Award for being the No. 1 community college in the country in planning, governance and finance.

2006: SCC partnered with UCF to launch DirectConnect®  to UCF, which guarantees graduates of the College hassle-free admission to the university as well as academic advising by university counselors.

January 2007: With a $2.5 million donation from the Central Florida Auto Dealers Association, the College opened its $10.1 million Automotive Training Center.

August 2007: The College opened its $30 million Center for Economic Development at Heathrow.

May 2008: SCC opened the $3 million expansion of its Geneva Center, which includes a Public Safety Driving Track and a new classroom building.

August 2009: SCC announced plans to change its name to reflect its expanding mission and new status as a state college.

September 2009: The Board of Trustees unanimously approved a motion to rename the institution Seminole State College of Florida.

January 2010: The $32 million Partnership Center opened on the Sanford/Lake Mary Campus. The building contains a two-story, state-of-the-art library plus classrooms and labs for Seminole State and UCF students.

March 2010: Seminole State's Board of Trustees approved the acquisition of 28.57 acres adjacent to the Altamonte Springs Campus, which is on State Road 434 near Maitland Boulevard.

2011: Seminole State was the fastest-growing institution in the Florida College System, according to Florida Department of Education data.

March 2011: Seminole State celebrated the 10th anniversary of its Oviedo Campus with a ceremony and presentation of the proposed new master plan for the campus’s next 10 years. To celebrate the anniversary, the College placed a time capsule, to be opened in 2026, in the campus’s clock tower.

October 2011: Educator Bob Schmidt left the bulk of his estate, valued at nearly $2.5 million, to create endowed scholarships for Seminole State students. The gift, the largest ever to the College, covers the wide range of programs available at Seminole State, including automotive technology, public safety and the first endowed scholarships for baccalaureate students.

September 2012: The College’s oldest classroom building, which was renovated in 2011, earned gold LEED (Leadership in Energy and Environmental Design) certification from the U.S. Green Building Council for promoting energy-saving green technology. This was the College’s first LEED-certified building.

January 2013: The renovated building L on the College's Sanford/Lake Mary Campus was named "LEED Project of the Year" by the Central Florida Chapter of the U.S. Green Building Council.

July 2013: Following its most complex website redesign in a decade, Seminole State introduced a mobile responsive website with content optimized for various formats, from desktop to tablet to smart phone.

May 2014: For the first time, Seminole State awarded degrees to students from all five of its baccalaureate programs.

June 2015: Seminole State marked the 50th anniversary of the Florida State Legislature signing the charter that created the College.

August 2015: Approximately 10 acres of land and 80,000 square feet of building space, valued at $4.1 million, the largest single gift in the history of the College, was gifted to the Foundation for Seminole State College by the Gould Family.

August 2015: The College's Board of Trustees unanimously approved an unsolicited joint development proposal to build a nearly 200,000-square-foot health science and education building at the Altamonte Springs Campus.

October 2015: Seminole State ushered in the next generation of its Athletics Program, unveiling a redesigned Raiders logo. The logo, which features a sharp-eyed hawk scanning from a perched position, was created in-house by Seminole State’s design team.

January 2016: Seminole State's Board of Trustees unanimously approved the conceptual design for a new Student Services Center on the Sanford/Lake Mary Campus.

May 2016: Seminole State partnered with Robert Gordon University in Aberdeen, Scotland, to offer a Master of Science (M.Sc.) degree in International Business.

June 2016: In honor of Seminole State student Luis Vielma and the other 48 victims who lost their lives in the Pulse nightclub tragedy, Seminole State observed a collegewide moment of silence, the Student Government Association and UNITY Gay-Straight Alliance held a memorial, and the Foundation for Seminole State College established the Luis Vielma Memorial Scholarship.

July 2016: With a $1 million commitment from Florida Hospital, the Foundation for Seminole State College exceeded the $12 million goal of its three-year comprehensive campaign.

July 2016: The Seminole State community joined other organizations in honoring the 49 victims of the Pulse nightclub shooting in Orlando with a dance medley. The video was one of dozens that were posted on social media with the hashtag #KeepDancingOrlando.

September 2016: The College’s Black Box Theatre was renamed Harriett’s Theatre, and new signage for the theatre was unveiled in honor of Central Florida philanthropist and arts supporter Harriett Lake who donated $500,000 for theatre renovations and scholarships.

December 2016: The Board of Trustees for Seminole State College approved agreements that allow for the construction of a second building at the College’s Altamonte Springs Campus.

April 2017: The Seminole State Raider softball team clinched the No. 1 spot in the Division I Mid-Florida Conference (MFC) for the team’s first-ever regular season conference title.

July 2017: The College achieved gold status, the highest level for performance funding in the Florida College System (FCS). The State Board of Education recognized Seminole State for its advances in student retention and completion, the number of graduates who are employed or continuing their education and the entry-level wages for graduates.

August 2017: After more than two decades of service, Dr. E. Ann McGee announced that she would step down as president of Seminole State College as of July 31, 2018.

January 2018: Supporting its vision of being a student-centered college, Seminole State opened a new $25 million Student Center at the Sanford/Lake Mary Campus. The two-story, 77,000 square-foot building serves as a one-stop facility for student services and student life from admission through graduation.

March 2018: The Oviedo Campus was renamed the Robert and Jane Lee Campus at Oviedo in honor of the late couple's financial contribution and commitment to the College.

July 2018: Following 22 years of service, Dr. E. Ann McGee stepped down as president and moved into the position of president emerita to provide fundraising assistance to Seminole State and to establish an Emeritus College for eligible retired faculty and staff.

Building on a Legacy

November 2018: Seminole State was designated as a premier “Purple Heart Institution” by the Military Order of the Purple Heart (MOPH) in recognition of the College’s support of military members, including veterans and their families.

March 2019: Seminole State installed Dr. Georgia L. Lorenz as its third president during an inauguration at the College’s Sanford/Lake Mary Campus on March 22, 2019.

May 2019: The Raider women’s golf team finished a historic season with a victory at the National Junior College Athletic Association (NJCAA) Women’s National Championship Tournament. Golfer Tai Anudit was individual champion, and Coach Christa Teno was named coach of the year. Anudit was also named the Mid-Florida Conference Female Athlete of the Year, making her the most decorated student-athlete in the history of Raider Athletics.

August 2019: Seminole State’s Center for Public Safety celebrated the completion of $2 million in Fire Academy upgrades and equipment purchases, including the arrival of two new training fire trucks, with a traditional “Wet Down” and “Push Back” ceremony on the Sanford/Lake Mary Campus.

November 2019: In just the second year after the return of the cross country program at the College, the men’s cross country team took home first place at the NJCAA Region 8 championships. Coach Octavius “Ocky” Clark was named Region 8 Men’s Coach of the Year.

May 2020: With the coronavirus pandemic canceling plans for a traditional commencement, Seminole State held its first virtual graduation to honor its Spring 2020 graduates.

September 2020: With a 28% Hispanic student body, Seminole State was officially recognized as a Hispanic-Serving Institution (HSI) by the Hispanic Association of Colleges and Universities (HACU).

December 2020: Seminole State hosted its first hybrid, drive-through graduation to honor the Class of 2020 who persevered in the midst of many challenges brought on by the coronavirus pandemic to complete their credentials. The creative, two-day event was covered by every major TV news organization in Central Florida.

February 2021: Thanks to a $94,000 grant from Duke Energy, Seminole State College got a power boost by installing a new solar array on its Robert & Jane Lee Campus at Oviedo. This system is projected to save the College more than $125,000 in energy bills over the next 20 years and to avoid roughly 16 million tons of CO2 emissions over its lifetime.

April 2021: Seminole State announced its partnership with Community College of the Air Force (CCAF). Through the partnership, the College offers online general education classes to more than 300,000 Air Force and Space Force personnel.

For more than 50 years, Seminole State College has thrived by adapting to and meeting the needs of an ever-changing community. By offering high-quality educational programs and services, the College continues to provide students and area residents with a multitude of resources. Now and in the years to come, opportunities for personal growth abound at Seminole State.

It all started with a dream...a dream that has been realized in extraordinary ways.