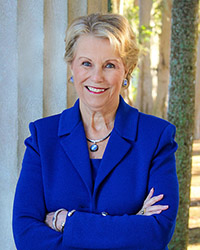 Dr. E. Ann McGee, President Emerita of Seminole State College of Florida, has been a dynamic and visionary leader and a passionate proponent of progress in education, business and the Central Florida community for more than 20 years as only the second president in Seminole State’s College’s history. A tireless advocate, she skillfully leveraged public and private resources to benefit the College and its growing student population.

Under Dr. McGee’s leadership, Seminole State grew from a single-campus community college into a dynamic state college with four campuses, almost 30,000 students annually and more than 200 degrees and programs, including seven bachelor’s degrees. Noted as No. 11 in the nation of the 1,200 community colleges for associate degrees awarded, the College now has an annual budget in excess of $80 million. The College’s Foundation has increased its assets from $1 million to over $35 million with a $70 million impact.

Dr. McGee stepped down from the presidency in July 2018 and welcomed Seminole State’s third president, Dr. Georgia Lorenz. She has transitioned into the role of President Emerita where she is “of counsel” to the new president, provides fundraising assistance to the College and is developing an Emeritus College for eligible retired faculty, staff and administrators.