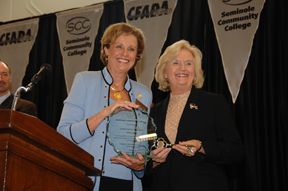 The CFADA Professional Automotive Training Center is a one-of-a-kind facility in Florida, and one of only a handful of similar facilities in the nation and a fitting location to house the College's General Motors Automotive Service Educational Program (GM-ASEP) which was recently named the top manufacturer-affiliated post-secondary automotive program in the nation by the Automotive Industry Planning Council (AIPC). 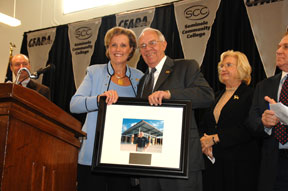 "In 1996, we [CFADA] realized SCC's growing Automotive Technology Programs were housed in out-dated buildings that jeopardized future expansion," CFADA Executive Vice President Barbara Miller said. "As a result, our members launched a campaign to collect $2.5 million for the construction of a new automotive training center."

"When the state was unable to provide matching funds in 2003, Barbara and 10 CFADA members enthusiastically 'marched' on Tallahassee during the 2004 session," said College President Dr. E. Ann McGee. "They made it clear to the legislators that private business support was worth recognizing and their efforts ensured the College's receipt of a $2.5 million state match to complete the automotive center funding. The CFADA's passion for the project was met, not only with a financial match, but an additional $1.5 million, which was made possible by support from Senator Daniel Webster." 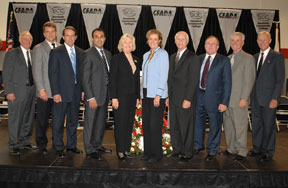 On October 19, 2004, CFADA members joined College officials as they broke ground on the CFADA Professional Automotive Training Center, which will allow the College to improve and expand its current automotive programs, develop new curriculum and make it possible to offer dual-enrollment opportunities to high school students. Those students will then feed into Seminole State's college-level programs, resulting in economic benefits that will impact the local community for years to come, enhancing the training of a desperately needed workforce.

The physical space in the new facility was designed by C.T. Hsu Group and built by Stiles Construction Co. to meet the unique training needs of the College's automotive programs. Additionally, Hartmann Architecture Inc. served as the architect of record for the project. The Center includes a 19,200 square foot shop with 40 bays, four alignment lifts, four above ground lifts and 29 in-ground lifts. A corporate training suite houses eight bays with four in-ground lifts and one heavy-duty in-ground lift. Five classrooms, 12 administrative offices including the CFADA's corporate offices and an impressive 2,000 square-foot show room complete the facility. 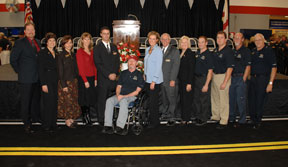 "Not once during the past 10 years did I ever doubt we would be preparing for this grand opening celebration," said Automotive Programs Department Chair Jim Cox. "We are proud to be a part of such a valuable partnership with the CFADA and we look forward to serving the educational needs of the Central Florida community and the state for generations to come."