Rally Raider is Seminole State College’s costumed mascot. Rally is a spirit leader and goodwill ambassador for Seminole State. Rally’s presence on campus is to create a sense of pride in the Raiders and to entertain and engage the campus community. 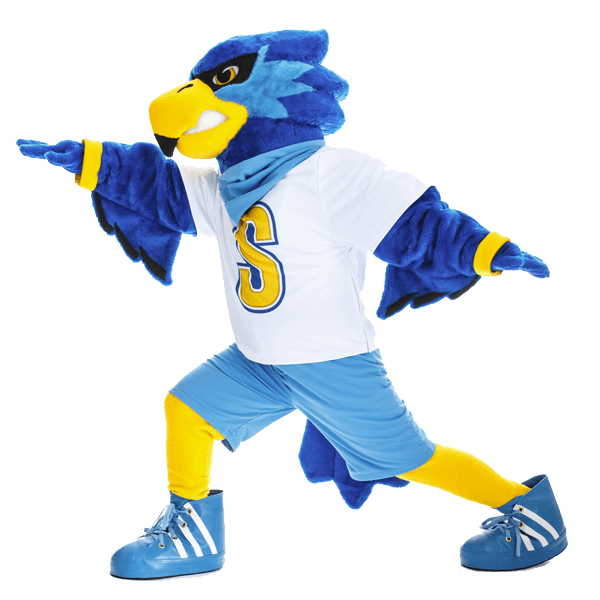 Students can get paid $9.58 per hour if selected as Rally Raider. Information about applying and trying out to become Rally through the application link below. Campus departments can request an appearance by Rally by submitting the request form from that link.

To tryout for Rally, you can submit an application.

In 1966, founding President Earl Weldon chose the Raider as the College’s mascot, representing the myriad ornithological life on the new campus. Central Florida Zoo bird keeper Cindy Dupree says the raider mascot is among the most successful raptors in the United States, and a dedicated hunter with sharp vision. Its tenacity, speed and keen-eyed pursuit of its prey reflect the ethos and attitude of the Raider athletes.

The bird of prey has been the Raiders’ visual concept, with some modifications, since the inception of the Athletics Program. The previous iteration had been in use since 2003. This newest logo design was timed to coincide with Seminole State’s 50th anniversary in 2015. Beyond Raiders Athletics, the College plans to use the new logo as a jumping-off point for fostering a broader sense of pride and camaraderie among students, alumni and staff.

The mascot, Rally, was named in 2015 after a college-wide contest and came to life in spring 2016.